LGBTLOL: A Night of Comedy 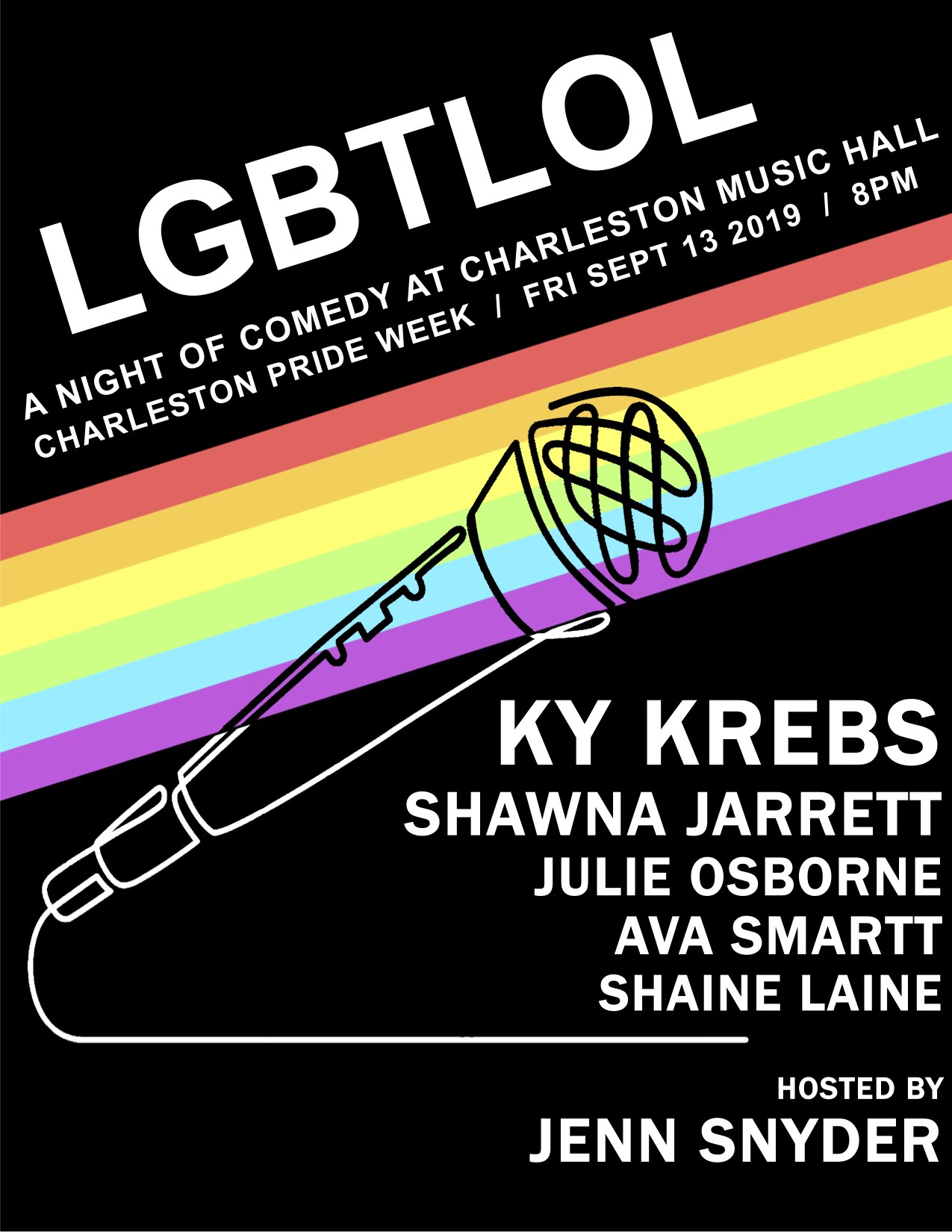 Ky Krebs is an Austin, TX-based stand-up comedian whose queer perspective and sharp wit delve into an absurd reality that manages to be both dark and playful. His self-produced, self-titled album debuted at #2 on the iTunes Comedy Charts. He also recently recorded his second special, “Oops, All Gay Jokes” in June 2019. He is the cohost of one of Austin’s most popular podcasts, Extra Salty, that dives deep into resentment and why people hold onto it or how they manage to let resentment go. Ky has been described as “a Birbiglia-esque storyteller and a masterful one” by Dallas’s TheaterJones publication. Austin’s ComedyWham has also said, “Krebs’s story is raw, inspiring, and he has plenty of experience to share about comedy, writing, and life in general. In a career, as in life, where finding your own voice is critical, he’s well on his way.”

Local favorite Shawna Jarrett makes her home here in Charleston, while touring the southeast to make audiences laugh from Florida up through the mid-Atlantic. Here at home, she is the head comic on the Charleston Comedy Bus and the host of The Get Up! comedy night (as well as a We Are Family alumnus!). This is her 4th year performing at LGBTLOL, and her first year serving on the board of Charleston Pride. Her material includes such topics as businesses housed in former Pizza Huts, her home state of Florida, and (related) the time she saw her cousin on COPS. In her free time, she accidentally starts internet feuds with famous cry-babies.

“Half as relevant as me as me” – Television’s Nick Di Paolo, through a mouthful of Doritos

Atlanta GA’s Julie Osborne was born in Cocoa FL and comes from a very diverse background.  She started performing stand-up comedy in 2011 after spending many years using her wit and humor to “deal” with prison inmates as a correctional officer, and in managing crazy people in corporate America. Since 2012, she’s been hosting and producing comedy shows for the LGBT community all over Atlanta.

Ava Smartt is a native Texan and trans woman whose incisive comedy tinkers with subjects on the border of right and wrong. Ava uses her small town charm to guide the audience into a liminal space where they feel comfortable to temporarily tip-toe over the blurred lines of what is and isn’t acceptable to laugh at.

Shaine Laine is an up-and-coming comic from Charlotte NC, where he takes his experiences and ignites the stage. From dad jokes to dark humor to tales of his transition, Shaine has a story to tell, and he’ll do it with equal amounts of love and satire.

Hosted by:
At 5’2″, Jenn Snyder packs a whole lot of funny in her one-two punch style of comedy. Topics ranging from her days growing up as a lesbian in a “good ol’ boy” town to dealing with the public on a daily basis, this comedian will pull you in with her stories and leave you wanting more with her quick wit and hilarious observations. Born and raised in Columbia, South Carolina, her ultimate goal is to unite all people through laughter. Jenn was last year’s LGBTLOL headliner, and if you were there, you know she brought the house down – so we couldn’t resist giving Charleston at least a little more Jenn.